GTT was formed in 1994 out of the merger between Gaztransport and Technigaz. This convergence united two innovative technologies, both with lengthy experience in the bulk transportation of LNG. The first Technigaz-designed LNG carrier was delivered in 1964, and the first vessel developed by Gaztransport followed in 1969…

Question marks hang over the issue of transporting Algerian gas from the Sahara to Europe. Events in Algeria result in the idea of a North Africa-Europe gas pipeline being abandoned. Thoughts then turn to the idea of shipping gas by sea in LNG carriers. Naval architects focus more closely on the possibility of transporting natural gas in its liquid state, since one of the properties of methane is that its volume reduces by 600 times when cooled to cryogenic temperatures. The first idea is to design freestanding tanks. But this solution wastes usable volume, and the metal alloys used suffer considerably at -163°C. The focus shifts to other concepts. Since a ship's hull is, by its nature, designed and structured to carry bulk cargoes, the idea emerges of loading bulk LNG into tanks with cryogenic linings.

The Evian Accords. France purchases its first LNG carrier - the Jules Verne - for operation on the route between Oran and France. Great Britain already has two of these vessels.

Gazocean (a shipowner owned jointly by Gaz de France and NYK Line) sets up a subsidiary company called Technigaz, which is responsible for developing a new LNG transportation technology using a profiled membrane designed originally by Bo Bengtsson (Iversen). The idea is patented in 1964. The technology is then improved to create the Mark I containment system, and the technique is developed and perfected using an experimental ship, the Pythagore. Technigaz continues its research into the design of containment systems, including those for onshore installations (which keeps the company in business when LNG carrier orders dry up in the 1980s).

At the same time, Audy Gilles (Worms Group) gives a team led by Pierre Jean the mission of working on a cryogenic membrane line with a film of Invar®, a nickel alloy with a very low coefficient of expansion in response to temperature change. The first patent is filed in April 1963, followed by a series of test models over the following two years, with another patent being filed in 1965.

Pierre Jean is invited to the USA by Phillips, which is considering exploitation of a gas field near Anchorage, Alaska. Convinced by the Invar® membrane solution, Phillips Petroleum and Marathon Oil - which hold the first contract to import gas into Japan - place an order for two LNG carriers, Polar Alaska and Arctic Tokyo, to be built in the Swedish shipyard of Kockums. They will remain in operation for 45 years.

The Polar Alaska is launched and is an immediate success. Between 1969 and 1978, ten LNG carriers use the NO systems developed by Gaztransport. Between 1968 and 1979, twelve LNG carriers are built using Technigaz Mark technology. Gaztransport and Technigaz receive no ship construction orders between 1978 and 1990, but use this period to step up their R&D efforts.

Technigaz is sold to the Amrep Group, which also sells the company subsequently.

The shareholding structure of Gaztransport changes. GDF becomes its majority shareholder with a 51% stake, alongside Total (39%) and Worms, which retains 10%.

GTT (Gaztransport & Technigaz) is formed out of the merger of the former rival companies and the shipping division of Technigaz. GDF owns 40% of the new company, Total 30% and Bouygues Offshore 30% (which is acquired by Saipem in 2002 and sells its stake to H&F Luxembourg in 2008).

GTT regains exclusive rights to the onshore storage technology developed by Technigaz in the 1960s and licensed to a Bouygues Offshore subsidiary in the mid-1990s.

Although the 2000s see substantial development of LNG carriers and significantly higher volumes of LNG carried, another transformational change accompanies the fast growth of the offshore gas industry. Prelude, the first FLNG (Floating Liquefied Natural Gas) facility, is ordered by Shell. It has twice the capacity of a standard LNG carrier. The second quarter of the year sees the launch of the Mark III Flex technology, which helps to reduce the boil-off rate of LNG during transportation.

Cryovision is formed as the services subsidiary of GTT. NO96 Evolution technology is launched in the same year.

GTT North America is set up in Houston (Texas), and the GTT UK dedicated training facility is opened in the United Kingdom. The 24/7 hotline support service HEARS is launched.

GTT is floated on the Paris stock exchange on February 27. The newly-created UK base becomes a subsidiary company called GTT Training Ltd. The Singapore headquartered investment company Temasek becomes an investor by acquiring the residual Total holding of 10.4%. Now listed on Paris Euronext Compartment A , GTT is included in the SBF 120 and MSCI Small Cap indices.

- Opening of an office in China

- Launch of the GTT MARSTM technology dedicated to LPG transport.

- GTT enters the field of LNG as fuel with an order from Hudong Zhonghua and CMA CGM for the design of LNG tanks for the nine largest container vessels ever built.

- GTT obtained certification of its anticorruption management system, based on the requirements stipulated in the ISO 37001 standard.

- Order from the Vard shipyard to build LNG tanks for the Commandant Charcot, the first LNG powered cruiser icebreaker.

- Order of 3 seabed Gravity Based Structures (GBS) for the Arctic LNG 2 project, a first for GTT.

- New name for the Group’s latest technology: GTT NEXT1. The system benefits from the NO96 proven technology as well as the use of an efficient polyurethane foam panel insulation.

- Acquisition of OSE Engineering, which provide AI and data analytics for industrial process.

- The year of LNG as fuel with 27 new orders.
- Continued development of Elogen with a first year devoted to strengthening its organization and its teams.
- GTT once again ranked first among ETI in number of patents filed, in the ranking INPI. 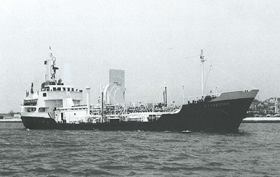 Polar Alaska, amoung the first LNGC in the US 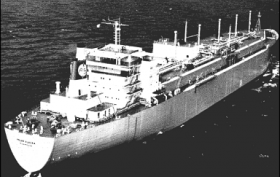