Paris – March 3rd 2021. GTT and Beijing Gas Group (BGG)[1] have concluded an additional cooperation agreement related to the Tianjin Nangang LNG terminal[2], currently under construction in its first phase. This new agreement mainly covers the collaboration for the phase II and III of the terminal, which include the construction of six additional 220,000 m3 latest generation LNG storage tanks.

This agreement has been signed on a ceremony held on March 3rd at the French Embassy in Beijing in the presence of the French Ambassador, his Excellency Mr. Laurent Bili, Mr. Tian Zhenqing, Chairman of Beijing Enterprises Group (BEG), Mrs. Li Yalan, Chairwoman of the board of BGG, and Mr. Adnan Ezzarhouni, General Manager of GTT China. Several key leaders in the industry and government officials were in attendance.

His Excellency Mr. Bili said at the occasion: “I am convinced that GTT, a company of excellence in the field of natural gas, has a great future in China, which has resolutely embarked on the path of energy transition.”

Mr. Tian Zhenqing, Chairman of the board of BEG, said: “We are glad to be part of this technological partnership between France and China; and proud to be the first in China to use the latest generation LNG storage tank.”

This agreement follows the first agreement signed in November 2019 between GTT and the Chinese major state-owned company BEG, at the occasion of the presidential visit in China of French President Emmanuel Macron, in presence of Chinese President Xi Jinping.

As a reminder, in June 2020, GTT received an order for the design of two 220,000 m3 membrane Full Containment tanks. Built as part of BGG's Tianjin Nangang LNG terminal, these two tanks are the largest LNG tanks in China, currently under construction.

In this new agreement, GTT will also support BGG to upgrade the National Standards of this new generation LNG onshore tank.

Philippe Berterottière, Chairman and CEO of GTT, said: “We are very pleased to extend our partnership with BGG, proof that the membrane Full Containment technology meets BGG expectations in terms of technological performance, cost competitiveness, and level of safety, while significantly reducing their environmental impact.”

Mrs. Li Yalan, Chairwoman of the board of BGG, added: “Being the first in China to implement this latest generation storage technology has been challenging. The project is going smoothly. I hope BGG and GTT continue to strengthen cooperation, and jointly promote the adoption of lower carbon footprint Membrane Full Containment technology among the Chinese gas companies.” 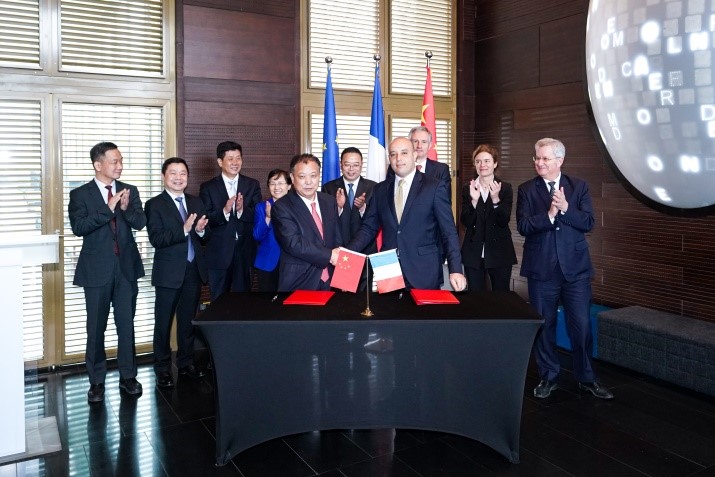 Signature of the cooperation agreement between Beijing Gas Group (represented by Mr. Xue Jianning, Group VP of BGG) and GTT (represented by Mr. Adnan Ezzarhouni, General Manager of GTT China) in the presence of the French Ambassador, his Excellence Mr. Laurent Bili.

[1] BGG is a subsidiary of Beijing Enterprises Group (BEG)