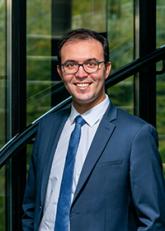 Developing technologies for a sustainable world requires solid convictions, a great deal of imagination and constant efforts in innovation. To tackle the new challenges that the maritime industry is facing, we need to combine various skills and complementary technologies. While answering the operational requirements, the new solutions must comply with the highest safety standards and remain simple. This has been the GTT goal over the last 55 years. Indeed, technological sophistication must go hand in hand with simplicity to increase the adoption of new technologies and reduce the risk of human errors. In this regard, digitalization is key. Smart algorithms can hide the physical complexity to allow unambiguous decision-making for efficient and safe operations.

In this issue of GTT Inside, we will see how these principles apply to GTT innovation. We will present digital solutions for efficient Boil-off gas management, ship-to-ship optimisation and tank predictive maintenance. In addition, we will present the evolution of the GTT membrane capabilities for LNG fuel applications. Finally, we will share with you some exciting scientific findings we discovered during the LNG Brick test campaign.

On worldwide shipping routes, LNG tanks sometimes face harsh weather conditions. Sloshing inside LNG tanks can create high loads on the containment system. GTT has developed tools to quantify it and even predict it at sea. This methodology can be applied not only for voyage management, but also for predictive maintenance of the tanks...

Boil-off gas is a key parameter in LNG Carrier design and operations. It is directly related to the economics of the LNG transportation industry. [...] GTT has studied the boil-off management of many ships in operation for a number of years. [...] Based on its unique expertise, GTT has developed advanced algorithms to predict the LNG consumption during LNGc voyages. This includes the modelling of complex phenomena such as LNG ageing and the influence of sea states on Boil-off gas generation, in addition to the impact of active systems like reliquefaction plants and subcoolers...

Offshore units (FLNG or FSRU) are loaded and un-loaded from/to LNG carriers during ship-to-ship operations. Some offshore units conduct up to 30 operations per year, and this number is expected to grow in the future, especially during winter where LNG demand is high.

During this process, the LNG carrier tanks can go through all possible filling levels...

The maritime sector faces new challenges with the evolution of environmental regulations towards carbon neutrality and the corresponding nascent supply chains. [...] GTT has developed LNG fuel solutions with the Mark III containment system, in particular for large applications like Container Vessels. The LNG tanks installed in those vessels usually have a design pressure or Maximal Allowable Relief Valve Setting (MARVS) of 0.7 barg in accordance with the IGF Code limitation for atmospheric tanks...

LNG is a clean and competitive fuel chosen by major industry players, who have launched significant newbuild projects for LNG fuelled vessels (LFS).

For these ships, electrical load at berth is mainly generated with gas coming from natural Boil-Off Gas (nBOG). As the nBOG rate varies with the liquid level in the tank and the electrical demand varies with the commercial operations at port, these two values very rarely match. If nBOG rate exceeds electrical generator consumption, pressure accumulation will occur inside the tank. As it is a key parameter for LNG tanks, GTT decided to carry out experiments to ascertain the LNG behaviour and anticipate such a pressure increase.